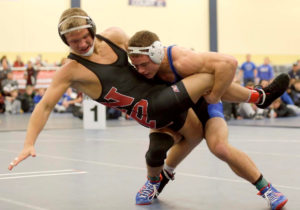 Brady Berge of Kasson-Mantorville, MN is ranked #1 at 160 lbs. and eighth in P4P.

It is time to move on from the recruiting Class of 2016.  FloWrestling has recently released their updated rankings with the Class of 2017 as seniors.  That is a sure sign that the school year is right around the corner.

As expected, Iowa recruit Spencer Lee of Franklin Regional High School in Murrysville, PA is at the top of the FloWrestling  P4P(Pound-For-Pound) list and also has the top spot at 113 lbs.  Spencer Lee is making history with his high school wrestling career that already includes two World Freestyle titles.  Lee will try and make it three World titles at the World Freestyle Championships in Macon, France that begin on August 30th.  I will be posting results of Lee at the World Championships on my blog and Facebook.  When Lee committed to the University of Iowa Wrestling program on April 20th, he became the biggest recruit in the history of Iowa Wrestling and is on pace to be considered the greatest high school wrestler in the history of the United States.

Gavin Teasdale of Jefferson-Morgan High School in Jefferson, PA is ranked #7 on the P4P list and number two at 120 lbs.  Teasdale, who will be a junior this fall, recently won a Junior Freestyle national title in Fargo at 120 lbs.  He committed to Iowa on the same day that Lee did.  Teasdale and Lee are teammates in the Young Guns Wrestling Club that is ran by former Iowa Hawkeye All-American Jody Strittmatter.

Iowa commit Luke Troy of Martin Luther King High School in California is ranked #16 at 160 lbs.  Troy committed to the Hawks last November. Troy has been training for years with the Kistler brothers who were All-Americans in the Gable era of Iowa Wrestling.  Don’t be fooled by the ranking.  Troy is a powerful wrestler with a lot of potential.

Top recruits that Iowa Wrestling are targeting are ranked very high in the FloWrestling P4P list.  Brady Berge of Kasson-Mantorville, MN is ranked as the eighth P4P recruit in the country and number one at 160 lbs. Berge made the Cadet World Team that competed in Sarajevo, Bosnia-Herzegovina last summer.  Berge was injured in the Minnesota State Wrestling Tournament in March and has been unable to compete since.  That tells me a lot about how good this recruit is in how he has maintained a high ranking without competing this summer.  Berge, who will be a senior, is looking to return to action for the Super 32 in October.  I interviewed Berge for my blog on May 25th.  Look for Berge to compete at 149/157 in college.

Super recruit Jacob Warner of Washington, Illinois is ranked right behind Berge as the ninth best P4P recruit in the country.  I would definitely have Warner higher on that list. Top recruits at that size are fewer and farther between and I really, really like this recruit. Warner, a senior, is also ranked number one at 182 lbs.  From what I saw of Warner last week, he will not see 182 lbs. this winter.  This guy is huge and growing.  Warner looks to be a perfect fit for 197 lbs. in college.  Warner has had an outstanding summer that found him making the Cadet World team in both Freestyle and Greco-Roman.  Warner will concentrate on Freestyle as he is in training for the Cadet World Freestyle Championships that will be held in Tbilisi, Georgia in September.  I interviewed Warner for my blog on May 20th and again on July 29th.  I will be posting results of Warner at the Cadet World Freestyle Championships on my blog and Facebook.

Max Murin of Central Cambria High School near Pittsburgh, PA is ranked seventh at 132 lbs.  Murin had a very good showing at Junior Nationals where he placed third at 132 lbs. Murin, a senior, is a teammate of Spencer Lee and Gavin Teasdale in the Young Guns Wrestling Club.  I look for Murin to wrestle at 141/149 in college.  I interviewed Murin for my blog on May 27th where he thought he would wrestle at 138 lbs. this coming season.   Also at 132 lbs., former Iowa commit Jason Renteria of Oak Forest-River Park, IL is ranked number one.

Recruits that I am keeping an eye on:

I have to mention Gable Steveson of Minnesota.  With a first name like that, an Iowa Wrestling Fan has to take notice.  Steveson is ranked as the fourth best recruit overall in the FloWrestling P4P rankings and number one at Hwt.  Steveson is a defending Cadet World Champion from Apple Valley, MN.  He will try and make it two World titles in a row when he competes at the Cadet World Freestyle Championships at 100kg (220 lbs.) in Tbilisi, Georgia in September as a teammate of Jacob Warner.  Steveson will be just a junior this fall and has a great future.

Austin O’Connor of St. Rita High School in Chicago, IL is ranked third at 152 lbs.  O’Connor, a senior, was ranked number one at 145 lbs. last season by several publications and was not on the P4P rankings. He had a good showing at Junior Duals this summer.  I must admit that I am a little surprised to see O’Connor ranked this low.  Austin O’Connor is a big recruit for the Class of 2017 that has yet to commit.  I interviewed O’Connor for my blog on June 3rd.

Max Lyon of Western Dubuque High School in Iowa is ranked 17th at 182 lbs.  Lyon had a very impressive junior year last year by dominating his competition in capturing the 3A title at 182 lbs.  Lyon had a very good summer with an impressive showing at Junior Duals in Tulsa, OK and at Junior Nationals in Fargo.  I look for Lyon to wrestle at 184 in college.