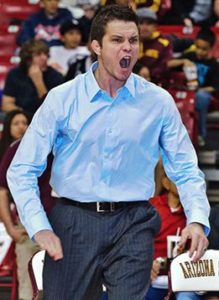 It was huge news in May when it was announced that Mark Perry was coming back home to Iowa Wrestling.  As a two-time NCAA national champion (2007 & 2008) and four-time All -American (second, third, first, first), Perry is one of the best wrestlers in Iowa Wrestling history.  His unique background of growing up in Stillwater, Oklahoma and going to high school at Blair Academy in New Jersey before becoming a Hawkeye is the best wrestling background that I have ever heard of.  Mark Perry has had his wrestling career influenced by the best that our country has to offer.

First of all Coach Perry, Iowa Wrestling fans are still excited up about Thomas Gilman winning a Silver at the World Championships.  What does that mean to the HWC and Iowa Wrestling?

Mark Perry: It means a step in the right direction and for us to continue to build.  I think it is really a momentum thing for the program as a whole and not just for the Hawkeye Wrestling Club.  Our plan is to make bigger and better things happen.  We all know that the Iowa program wants to be at the top of the food chain.  Gilman was hurting, you could see that in his interview.  It was an emotional thing when you get that close.  But we feel as a program that him and the other guys in the Hawkeye Wrestling Club and the collegiate program are in the crosshairs.  We are right there.  We just need to keep our heads down, keep working hard, and sooner or later the tides gonna turn.

You were just at the Freestyle World Championships.  From a technical and physical standpoint, where do you see Team USA compared to the rest of the world?

Perry:  From a physical standpoint, when you look at Gilman and our others guys on Team USA, we are physically built.  Now that does not necessarily mean everything.  From an agility, from a flexibility, from a durability standpoint, from an explosion standpoint, there are still gains to be made from those guys and the wrestlers chomping at the bit to be the guy.  We are right there obviously with the best of them.  We can continue to make gains there.

From a technical standpoint, I think we are getting better.  I am a perfectionist as I am sure most high level coaches that were athletes are.   That is where I think we should really, really continue to make our gains and make our mark on the world.  Not that others are ahead of us.  For the Gilman situation, it was not an issue of will, it wasn’t a power thing, and it wasn’t even a lack of knowledge.  It was just maybe a little bit unfamiliar with a finish.  Some people look at the scoreboard in not only in the finals, but throughout the tournament.  That is a position that he had success with in the states, he may have got a different feel that threw him off a little bit.  I put that on us.  If we as a group were not prepared that is the difference in a dominate gold medal run and a silver medal. You can look at all countries up and down when you are breaking it down technically because usually for the most part at that level that is a big part of wins and losses.

I am excited not only for the Hawkeye Wrestling Club and the Iowa program, I would not have jumped into the International scene if I did not truly believe that we are about to make a historical run not only as a club, but as a country.

What will it take to get more HWC wrestlers on Team USA for the World Championships and Olympics?

Perry: I think doing exactly what we’re doing right now.  We’re back to work.  We will continue to look for people from the outside.  We have Jesse Delgado and Alli Ragan that stand by the standards that the Brands brothers hold the program to.  And just being diverse in our thought process.  Keep building.  Building something special.  Iowa is special.  I grew up around probably the greatest of all-time with my uncle (John Smith) and probably one the greatest programs ever.  I spent time as a coach at Penn State.  I had my collegiate career at Iowa and high school at Blair.  Iowa is as special a place as I have been in the world.

I think you are going to see more and more and like it.  I guarantee it you will see more and more wrestlers representing the Hawkeye Wrestling Club in the Worlds. Some will be guys that are right out of the collegiate program like Thomas Gilman, Tom and Terry Brands, etc.  Some will be guys coming in like Jesse Delgado competing for a different country or Alli Ragan that is coming in from somewhere else.  We are going to keep adding and pushing the envelope for the sport.  It’s just exciting times, you know.  It’s a little bit unknown territory for all programs throughout the country with a Region Training Center.  Overall, we really want to think of it as a professional sport that we are starting to see that more and more.  There are great examples of wrestlers that were picked up by a program after college as a professional athlete by a Regional Training Center and flourished in International wrestling.  They were put in a great atmosphere and had great careers. Obviously we want to develop Hawkeyes right out of the program but we are also open the the right people that are like minded that are looking to join our program as well.

Could you tell us how you became the new head coach of the HWC?

Perry: They reached out to me.  Obviously I am an alumni.  Iowa is a very, very special place for me.  I have been thinking about this for awhile.  I am a historian, relatively young, but I have really studied the sport from the beginning.  I just see this as a time where whatever you want to call it, post-grad professional, we want to treat it like we’re professionals.  Especially in the way that we prepare in our thought process and lifestyle.  I just wanted to be apart of something a lot bigger than myself.  I think this a movement that is happening in the United States at the highest level.  It’s going to give people opportunities.  The opportunity to be a coach, whether it’s a head coach, club coach or whatever title you want to give it.  We are seeing more and more opportunities rise in our sport at the International level, the highest level.  That makes me excited and to do it at my alma mater was a no-brainer because I had been thinking this way for awhile.  Wrestling in the United States is the most popular I guess at the collegiate level.  I believe now that there is a shift that International will become more popular with more World medals deserving the support like we have in college wrestling.  I just want to be apart of helping that move forward.

What do you bring to your new position for the HWC?

Perry:  Number one is we are almost I guess you could say we are very identical in thought process and mentality and what we want to accomplish.  Different perspectives in different areas, different body types, different styles of wrestling.  I study the sport as hard as anybody on the planet.  I am 100% certain of that.  I study the skill levels of every style you can imagine and I dissect it.  That is kind of just my evolution of training.  The sport of wrestling I just really enjoy trying to figure it out.  It’s a chess match.  I don’t really look at it as I know more than anybody else.  I just think I am a great resource for the Hawkeye Wrestling Club and to Tom and Terry Brands and the program.  I know that my efforts and what we do is on par with the best of the best out there.

What fundraisers does the HWC have coming up?

Perry:  We have a golf outing on September 21 in Des Moines and on October 14 we have the HWC Shoot at the Highland Hideaway Hunt Club by Riverside.  We have everything set up for donors at https://www.hwcdonor.com/.  Whether they are a recurring donor, or a $5 a year or $20 a year, or a hundred or a million dollars a year.  Moving forward we are evening going to look for people to really put the nail in the coffin.  If we can keep this rolling with what we have while keep building this.  I am a resource for the Brands brothers and the program.  It never stops.  It is never going to stop.  It is something that has to continue.  Hopefully it will not only continue at Iowa but at other collegiate programs too.  We can become the consistent power world-wide.  Hopefully Iowa, I am biased but I hope Iowa is at the very, very top of the food chain.

Can you give us a calendar of events for HWC wrestlers competing this fall and winter?

Perry: As of right now, we have Sammy Brooks going to the U23 World Team Trials in October (Oct 6-8 in Rochester, MN).  Basically the whole group outside of Gilman most likely will be competing at the Dave Schultz (Nov 1-4 in Colorado Springs, CO).  That’s not 100% certain but that’s what we are targeting.  Everything looks great right now.  From there we’ll see what’s next.  We would like to send guys to tournaments here and there maybe between November and December a little bit.  And then we will possibly look at another event after the first of the year and then the U.S. Open.

Perry: I appreciate the warm welcome.  Everything has been great so far.  We are going to continue to get everyone’s support.  More importantly is awareness of what we are working on and to get that out to people.  I think that’s the biggest thing with wrestling at the senior level and collegiate is that lack of communication. We need more awareness and support.  We are all one entity, rubbing elbows with each other.  The bigger and better the Hawkeye Wrestling Club, the bigger and more dominate the Iowa Wrestling collegiate program will be.

To contribute to the Hawkeye Wrestling Club:  https://www.hwcdonor.com/