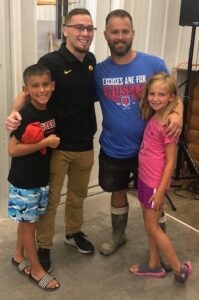 Spencer Lee showed that he is just as impressive off of the mat as he is in competition.  On Friday Spencer appeared at Elite Stone in Lisbon, Iowa.  I was invited to listen to his speech to the employees before he began signing autographs and taking pictures with fans.

Eric Krob, the owner of Elite Stone spoke of how they strive to have unity as a team and Spencer took over from there.  I was impressed to say the least.  Spencer spoke and then fielded questions from the employees. To hear a 22 year old college student that is that confident and comfortable speaking to a crowd of people and fielding questions reminded me that this guy has performed in front of thousands of people for years and literally all around the world.

There are several successful former Lisbon wrestlers that are employed at Elite Stone including former Iowa wrestlers Dean and Carter Happel as well as Jamie Kamberling and JJ and Zach Butteris. Eric Krob, the owner, was a member of the 1988 Lisbon 1A State Championship team.  So this is a wrestling and Iowa Wrestling company.  Set on the edge of Lisbon with fields of corn all around made this a great setting for wrestling and Iowa.

The highlight for me was that my dad Francis Conner was able to meet Spencer and speak with him.  My dad is a real big Iowa Wrestling and Spencer Lee fan. I was able to get a picture of them together that proved to be very popular on Facebook and Twitter.

Spencer Lee is definitely an ambassador for the University of Iowa, Iowa Wrestling, and our great sport of wrestling. After hearing him speak it is an easy prediction that Spencer Lee will be successful in whatever he pursues after his competition days are over.

In wrestling information Spencer said that he weighed 130 lbs. that morning and he definitely looks like he has put on muscle since last season.  I am looking for a noticeably bigger and stronger Spencer Lee this season. Scary thought…for the competition.

Thank you Spencer Lee, Eric Krob, and Elite Stone for this great event.

In the photo Spencer Lee is with Branzen Gable, Bella, and JJ Butteris.